The Civil War, also known as the War between the States, was fought from 1861 to 1865 between the North and a group of slave states that seceded from the Union and declared themselves the Confederate States of America.   The focus of the war was over states' rights to resolve the issue of slavery, especially whether or not slavery would extend into the western territories.  After four years of bloody fighting, over 600,000 soldiers were dead and much of the South's infrastructure was destroyed.  The Confederacy collapsed, slavery was abolished, and Reconstruction began. It would be a long road back. 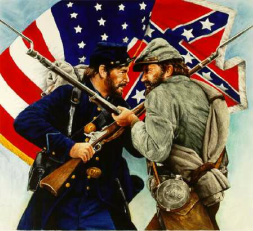